Mani is the proud father of two, including Arockiyanathan, a sponsored child through our Bangalore site. Mani is 59 years old and works as a daily wage worker, as does his wife. 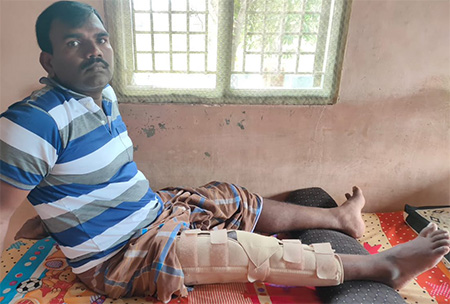 One late afternoon in July, Mani was riding his motorbike home. It began to rain and he slipped and fell off the bike. He was rushed to the hospital, where scans showed a fracture in his right thigh. He underwent emergency surgery the next day. He was in the hospital for four days and was discharged in stable condition.

He made two more trips to the hospital in the next ten days to get his wounds re-dressed and his stitches removed. Otherwise, Mani was at home on bedrest, taking his prescribed medications. His doctors advised him to be on bedrest for three months for his leg to heal properly. He will meet his doctor again in December to plan the next stage of his recovery. So far, Mani's health hs improved well.

Mani's limited mobility has kept him off work for months, and it will continue to keep him home for months yet. His wife must provide for the whole family with her earnings as an agricultural labourer, and with the support of Arockiyanathan's sponsor. This has placed the already vulnerable family into an even more challenging financial situation. When they received Mani's hospital bills, they knew they could not afford the $1,278.20 CAD charge. The Bangalore sponsor site hs therefore requested the full amount, which includes Mani's x-rays, consultations, and all the ancillary fees of his hospitalization.