Suraj is ten years old and is sopnsored through our Assam site in northern India. A sudden bout of weakness recently signalled to his parents that something was very wrong. 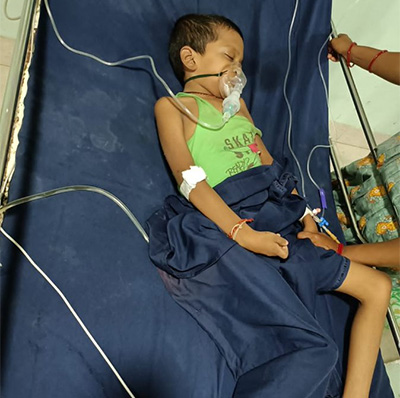 When he first felt weak, his mother took him to the hospital, but the doctors could not find anything amiss. But two days later, his mother found him lying on his bed with very stiff arms and legs. He began vomiting. She rushed her son to the nearby hospital, where the doctors performed x-rays, blood and liver tests. They realized Suraj was having a seizure.

His fever did not break for seven days, and the seizure was continuous. The doctors moved him to the ICU and, for a time, his condition was critical. His doctors saved his life, and he was eventually allowed to go home. He is still weak from his illness, but is recovering.

Suraj's parents now face a hospital bill of $747.78 CAD, which is far beyond their means. The Assam sponsor site has put forward a request for the full amount. This will ensure his parents can cover the charges for Suraj's diagnostic tests, IV drips, medicine, and othe ancillary costs from his hospitalization.