Chinnappan is a husband and father of four living near our Madurai sponsor site in India. He recently had a painful accident that has left him unable to work. 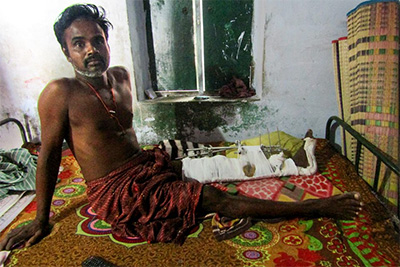 Chinnappan, 40, was attending a traditional ceremony at a family member's home. As part of the ceremony, the celebrants set off fireworks. One hit Chinnappan's left leg, causing a serious wound. His family rushed him to the hospital, and after first aid, he underwent x-rays and further scans to assess the damage.

The doctors determined that he would need surgery to install a steel plate to mend the blast injury and clean the debris from his leg. He underwent the procedure the same day. After a week, his doctors discharged him, telling him to return in six months to have the plate removed.

His family had relied heavily on Chinnappan's income as a construction worker, as his wife does not earn a reliable wage as an agricultural labourer. Even with the ongoing support of their daughter Hema's Chalice sponsor, Chinnappan's convalescence will be a financial hardship for the family. The Madurai sponsor site, hearing of Hema's father's emergency, has put forward a request to help the family pay his medical expenses.

The total expenses are $1,793.22 CAD, which include Chinnappan's consultation, diagnostic imaging, surgery, blood transfusions, and medicine.