Arockiyaalexander is a cook and a father of three in our Tamil sponsor site. He has not been able to go to work since July, because of severe hip pain. 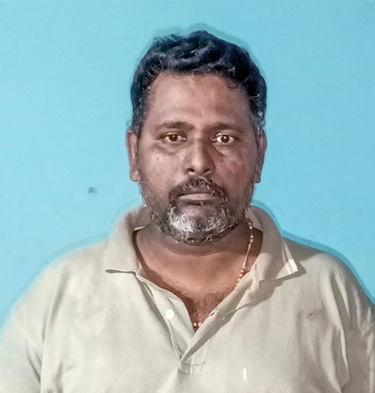 Arockiyaalexander, 42, has been having pelvic joint pain since 2017 and has been taking medication. But it became so severe this July, he was not able to walk. He went to the hospital for an x-ray. The imaging showed he had joint damage on both sides of his pelvis. He needed a double hip replacement.

In mid-August, he underwent the two replacement surgeries - first on his right, then his left five days later. The hospital discharged him after three days. His right-side stitches healed well, but the incision on his left became infected. He needed a third surgery to clean the wound and re-stitch the incision. After this, and a round of medication, Arockiyaalexander is healing well and feeling much better.

Arockiyaalexander has been off work, so his wife, Nirosha, has become the sole breadwinner. She earns a small income doing seasonal wage work. The family is grateful that their daughter, Parveena, is supported by a Chalice sponsor as she completes her grade nine classes. The Tamil sponsor site learned of Parveena's parents' situation and knew that her father's medical bills were beyond the family's means.

The Tamil site staff have therefore requested financial assistance for his medical expenses, which have come to $5,886.98 CAD. Your support will enable Arockyaalexander and Nirosha to cover his x-ray, further diagnostic imaging and scans, surgeries, the two hip joint implants, and all ancillary hospitalization charges.