Ponnammal, 55 years old, lives with her daughter-in-law Lakshmi and her grandchildren. Both Ponnammal and Lakshmi lost their husbands, and so the sponsorship of her grandson Kalaiarasan has been a great source of support. Lakshmi is the breadwinner of the family, working as as an agricultural labourer. But she struggles to stretch her humble wages to provide for the family of four. 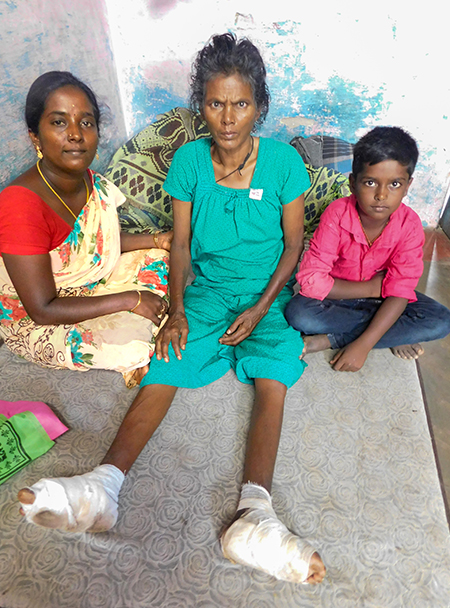 Grandmother Ponnammal lives with diabetes and has been in regular treatment through public health for the last three years. In March, she started having vomiting and fever, and then both her legs started swelling, one after another. She sought treatment, but the swelling of her legs persisted, leaving a deep wound on the inside of both her legs.

In May she was admitted to a hospital that specializes in diabetes care. X-rays and blood tests revealed she had diabetic foot, a painful condition for the foot that went unnoticed due to nerve damage caused by her diabetes. The surgeons made the difficult decision to amputate three toes on one of her feet.

Ponnammal’s medical emergency has incurred medical bills totaling $734.69 CAD, which includes the surgery itself, consultation and nursing fees, medicine, and charges incurred for her lab tests and surgical dressings. These bills are far beyond her and Lakshmi’s already limited means, and so the Madurai sponsor site have requested assistance for the full amount.